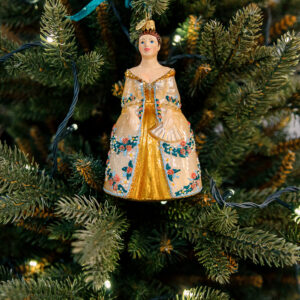 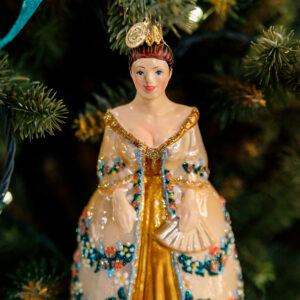 That glass Polish lady aristocrat wears a 18th century ivory dress, decorated with flower garlands, which were highly fashionable during rococo period. While cuffs are adorned with flowers, the décolletage is highlighted with a golden edge. The costume is completed with a hair bun trimmed with roses and a fan, which no elegant woman could do without. The handmade figure was inspired by Apolonia Poniatowska’s portrait painted by Marcello Bacciarelli. It belongs to The Bombkarnia author’s collection.

Polish national costumes appeared on Poland’s territory in the 16th century and survived almost unchanged to the interwar period. They were reserved for representatives of the noble families and were closely linked to Sarmatian’s ideology and culture which were initiated on Polish lands by the legendary tribe of Sarmatians, descended from the East. The costumes worn by noblemen brought to mind the eastern style, because of the use of intensely colorful and expensive fabrics with masterly woven silk belts that had to be imported all the way from Persia and Turkey. The whole Polish man costume had to be completed with a specific image: a half-shaved head and a considerable moustache. Female clothes, which had been under a strong French influence, were altered to fit the local customs and so received native Polish elements. One of the examples was an extra layer of fur added to from the inside to short coats and hats. During the 18th century wars, Polish national costumes were used as military uniforms, and later, in the time when the Poland disappeared from the maps, wearing them was a way of showing patriotic feelings. Their artistic form was always greatly admired, not only by the Polish, but also other European artists like Rembradt van Riji, author of the well-known Polish Nobleman.